Till next time
Mathew Hughes
Posted by mat at 9:43 AM No comments:

Hi All
On 16/2/10 (hope I got the date right) I witnessed an unusual movement at Sandgate Station comprising of 4701 in candy scheme, FS/No4/FS/FS/FS heading to East Greta Junction. 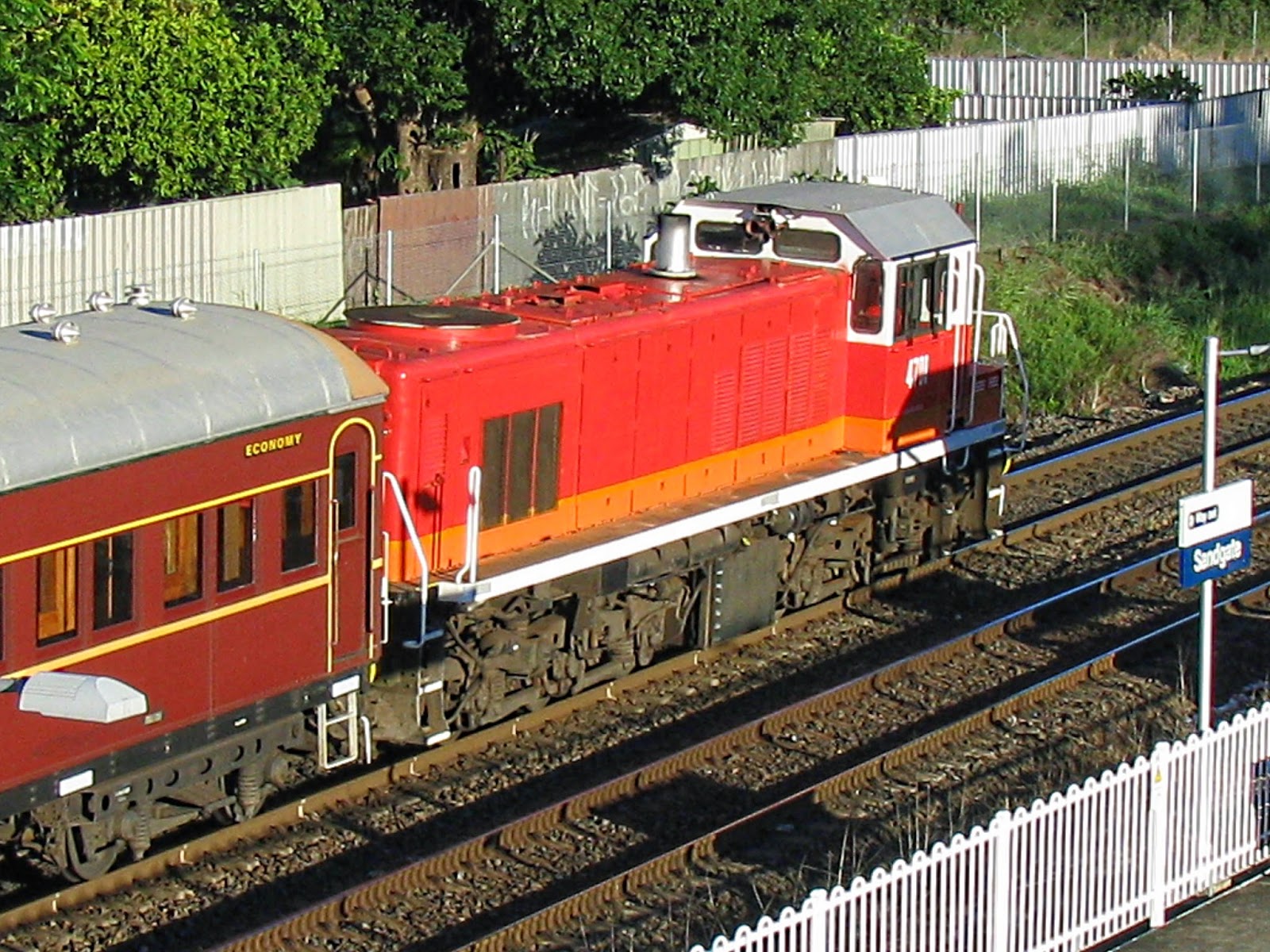 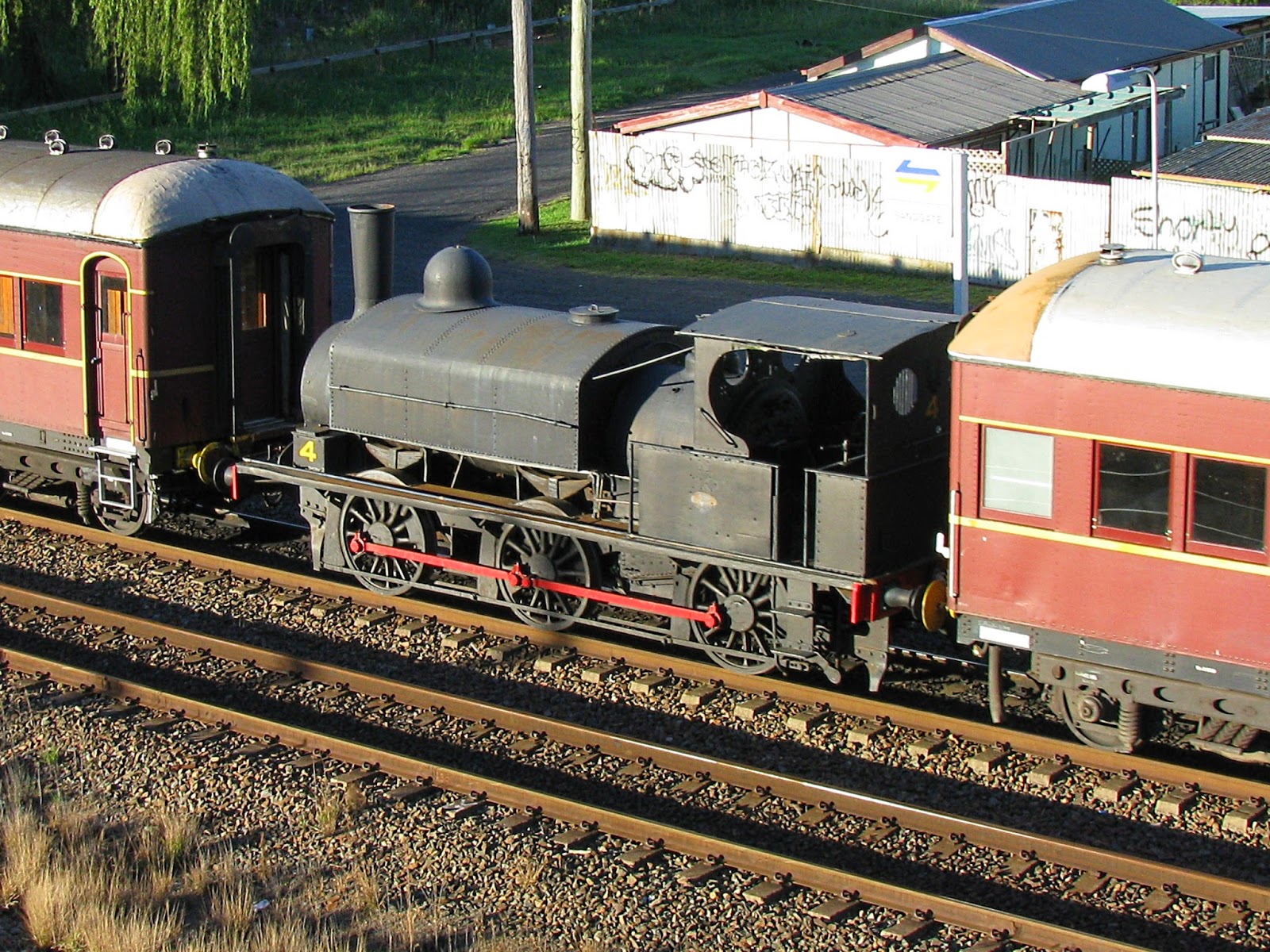 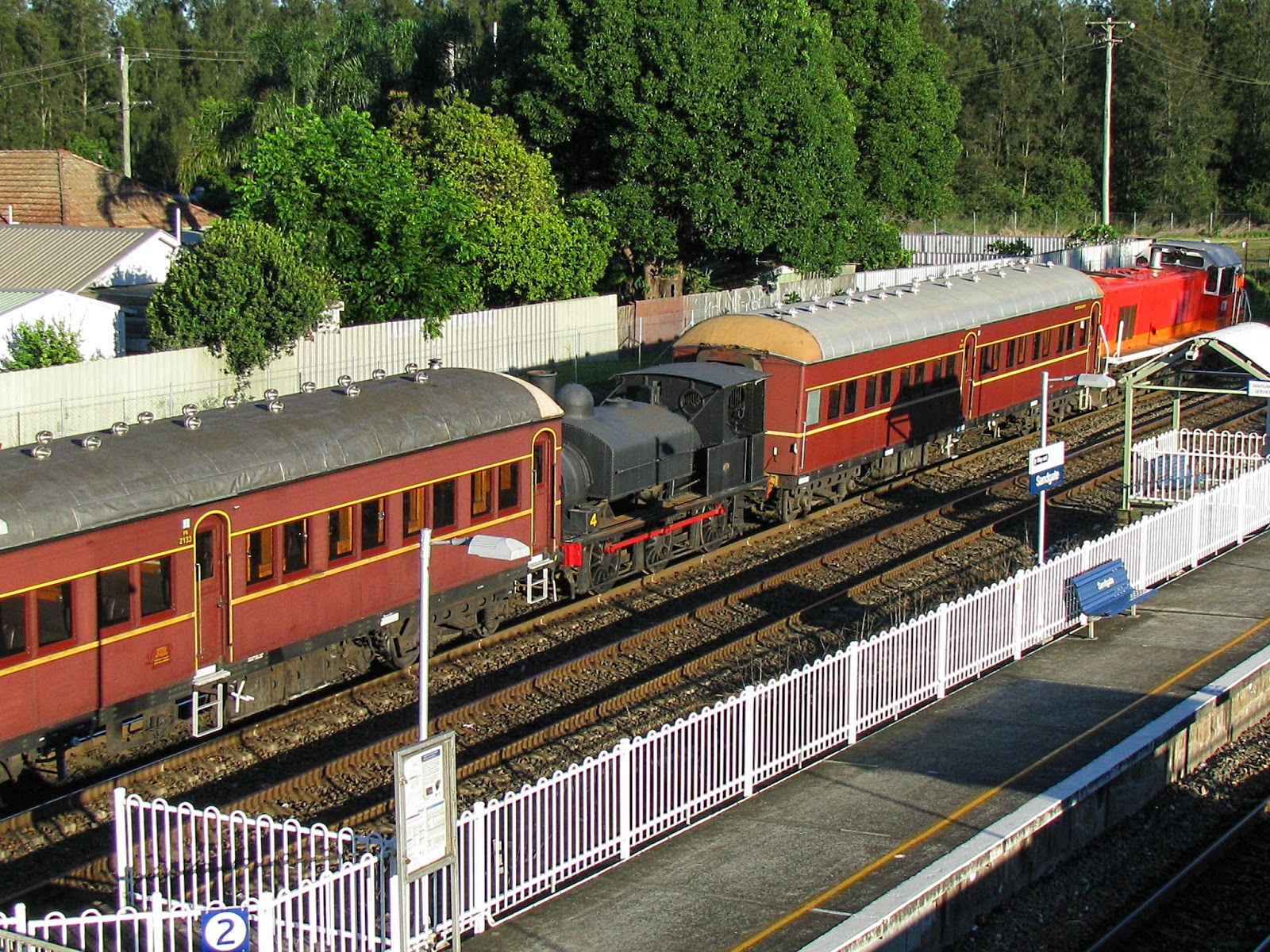 Last weekend I went to the Newcastle Regional Museum to photograph the no4, which is currently on loan from NSWR Transport Museum. 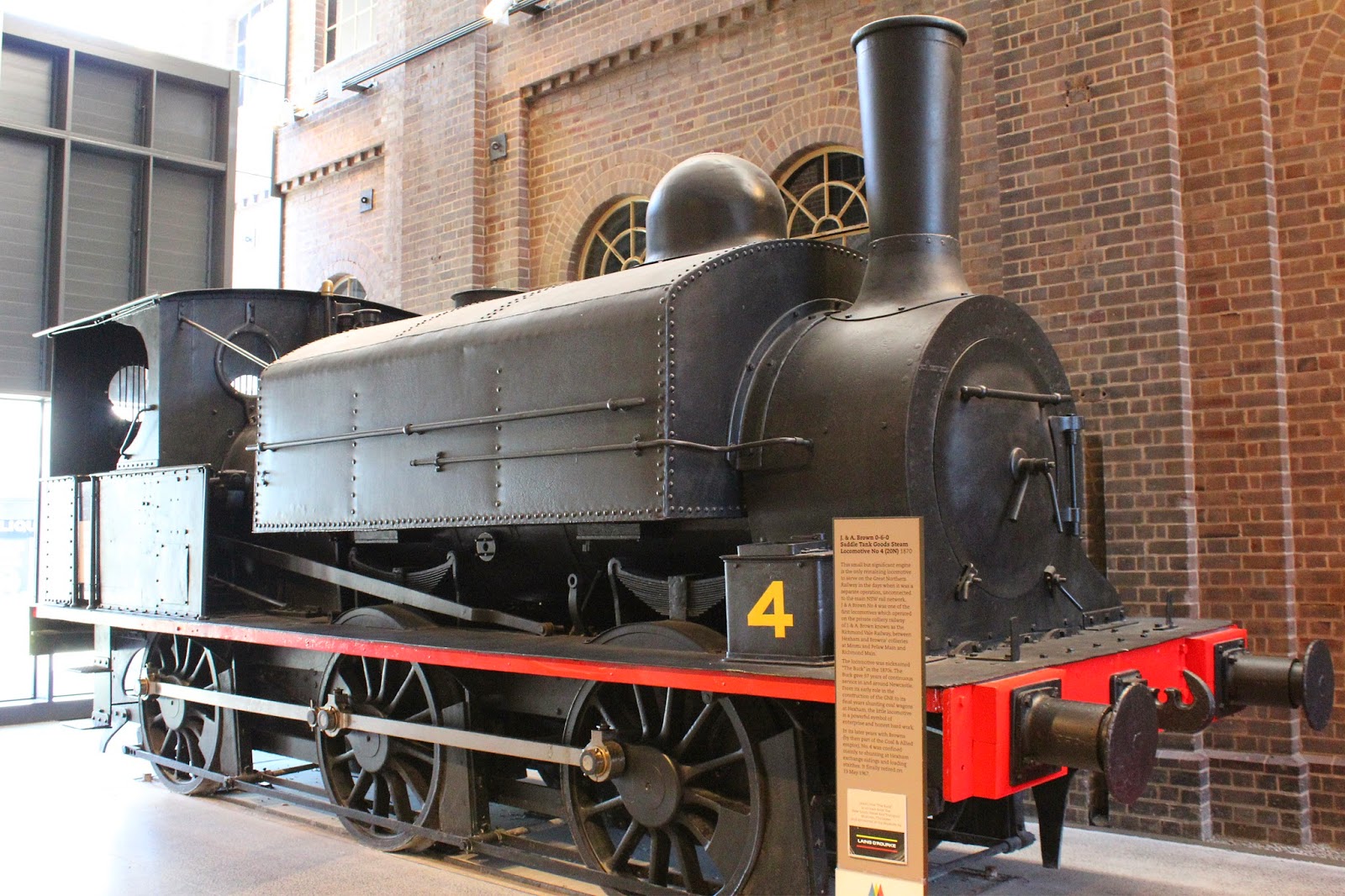 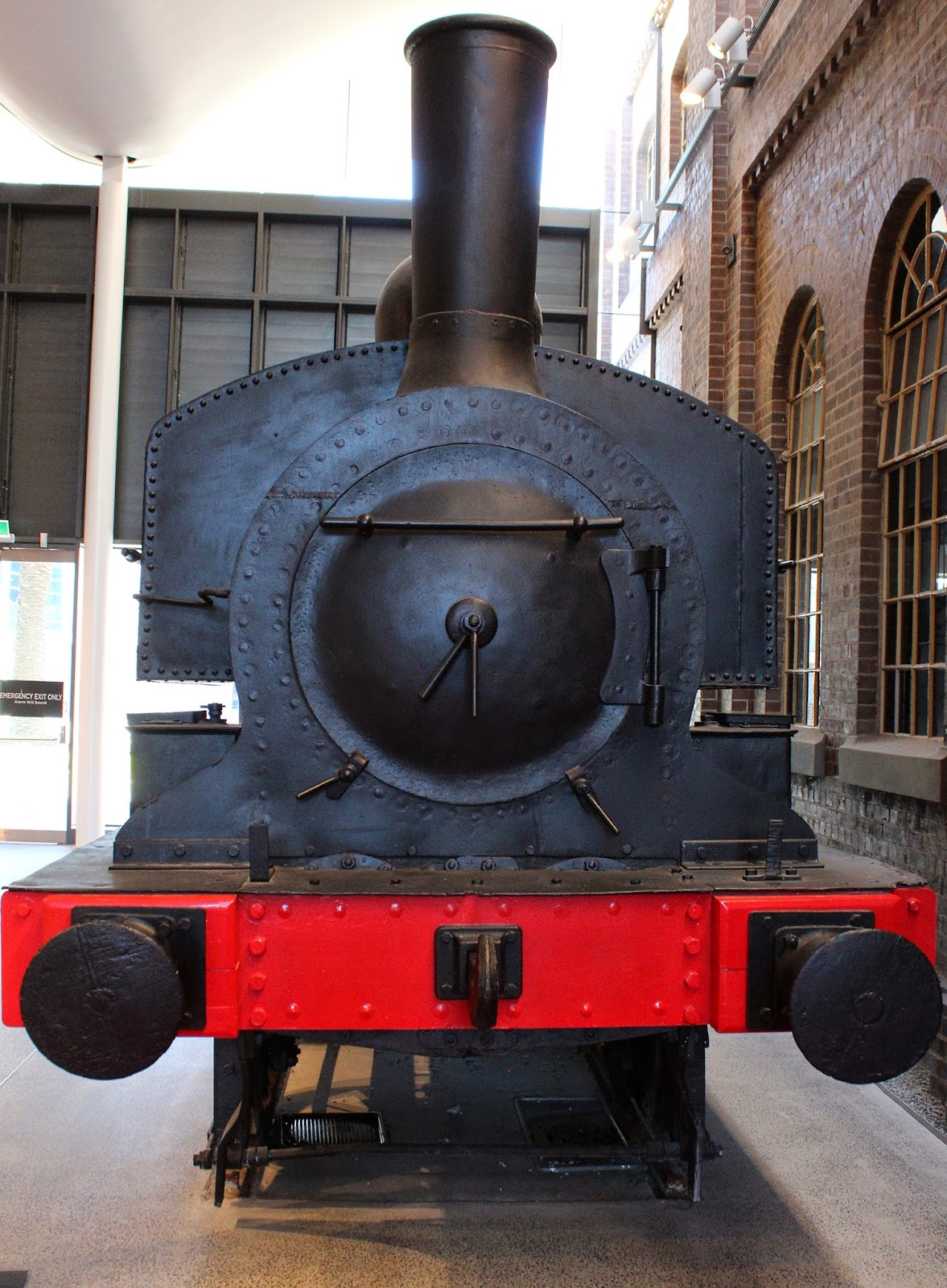 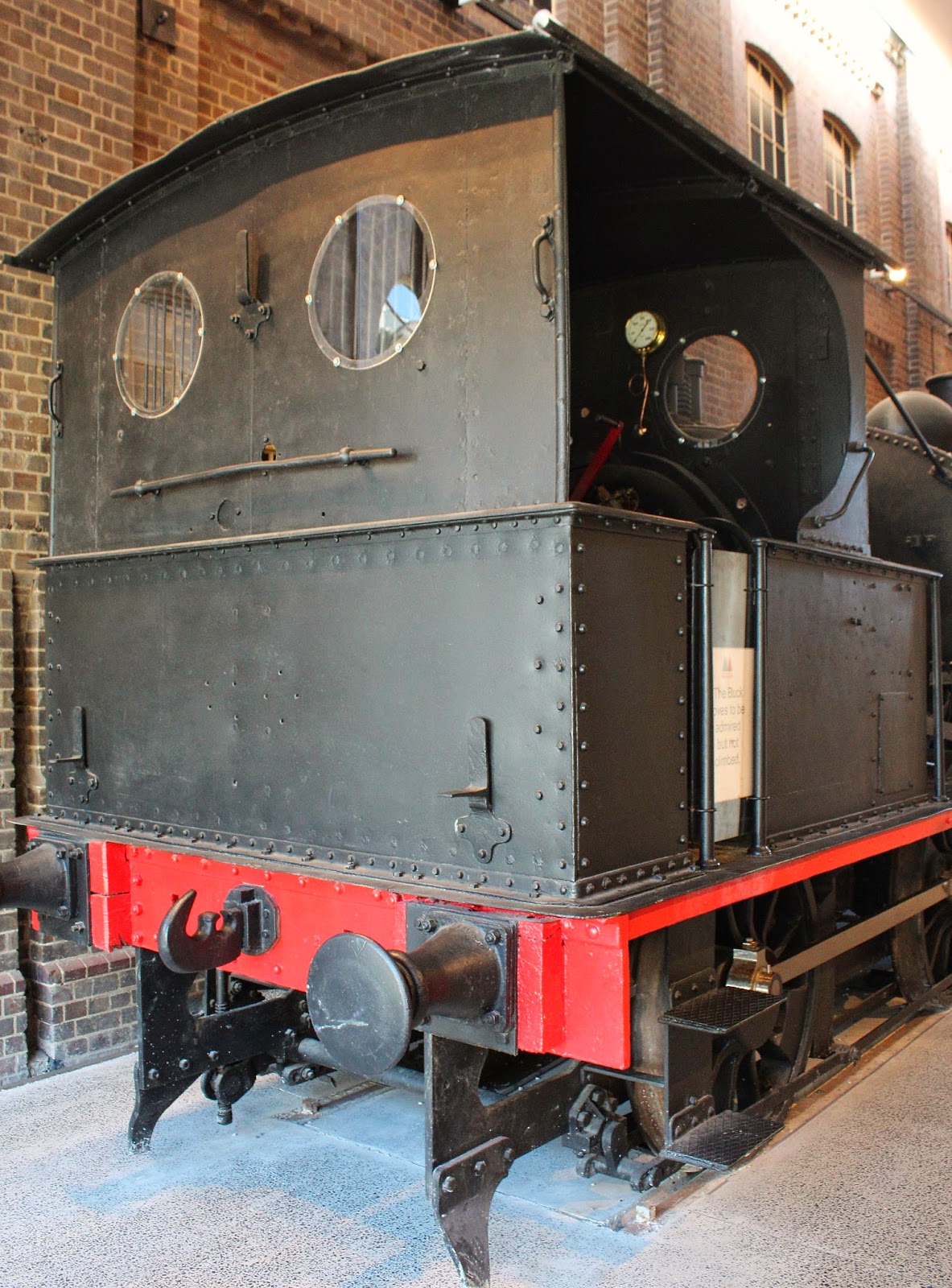 Till next time
Mathew Hughes
Posted by mat at 8:50 PM No comments:

Hi there, this is Rachel (Mats girlfriend) and for this blog he thought he'd try something a little bit different and got me to write a review of my insight on a recent trip we had away... It's my 1st and hopefully not my last.. Hope it's to his expectations..

For Mats birthday this year, I decided to do something train oriented. I started looking up train restaurants and came across one which wasn't too far from home, called Rattlers and then soon realized they had accommodation in carriages too.. I though it'd be a great idea to take him away for the night and experience something different... I booked a package deal, which included 1 nights stay and a 6 course meal for 2, which was surprisingly at a very reasonable cost! I wanted to keep it all a secret, which was hard as I had booked a month before his birthday and I was excited because I knew he would absolutely love the idea. When the day finally came, I had to be sneaky but act as normal as possible to not give anything away.. I packed a bag with clothes etc.. for the night and an esky with food and drinks and hid them in the boot of the car. I told Mat to bring along his camera because I was taking him out for the day to go look at some train stuff I'd discovered on the net.. I didn't tell him exactly whereabouts we were going (I wasn't too sure myself), we just jumped in the car, entered Dungog into the GPS and off we went...


I had found a Museum in Paterson on the net that I thought would be of interest to him, so I took him to the station to see if he could get some shots from around the platform (I knew the Museum was shut for the day). He was real happy with that as he got a few good pics..

From there we made our way to Carriageway- I told him that I had found a property that had train related things on it and that I had spoken to the owners who had given us permission to go and have a look around.. When we pulled into the long driveway, I could tell by the look on his face that he was very surprised and he had no clue that the place existed! I asked him to wait in the car while I went in to let the owner know that we were there. 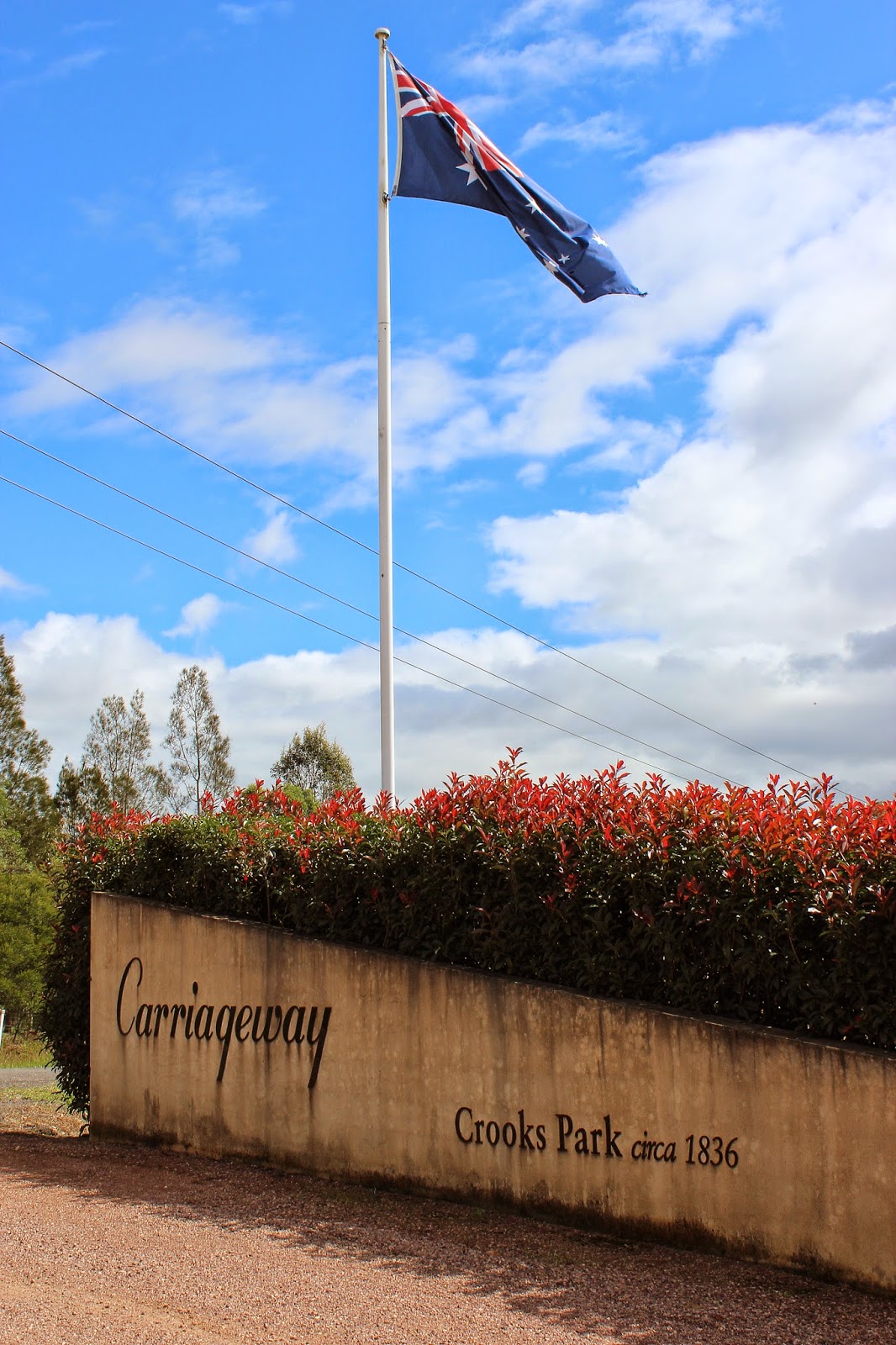 The reception was in a carriage, which happened to also be the Rattlers Restaurant.. Inside I was greeted by a very friendly lady, who seemed to be almost excited as me as she knew about my big surprise! She told me that she had swapped us from the carriage I had booked (3601) to The Flyer, as it was closer to the train line (which goes straight through the property), where Mat could just look out the window and watch the trains go past.. I was very grateful that the lady had done that for us :) 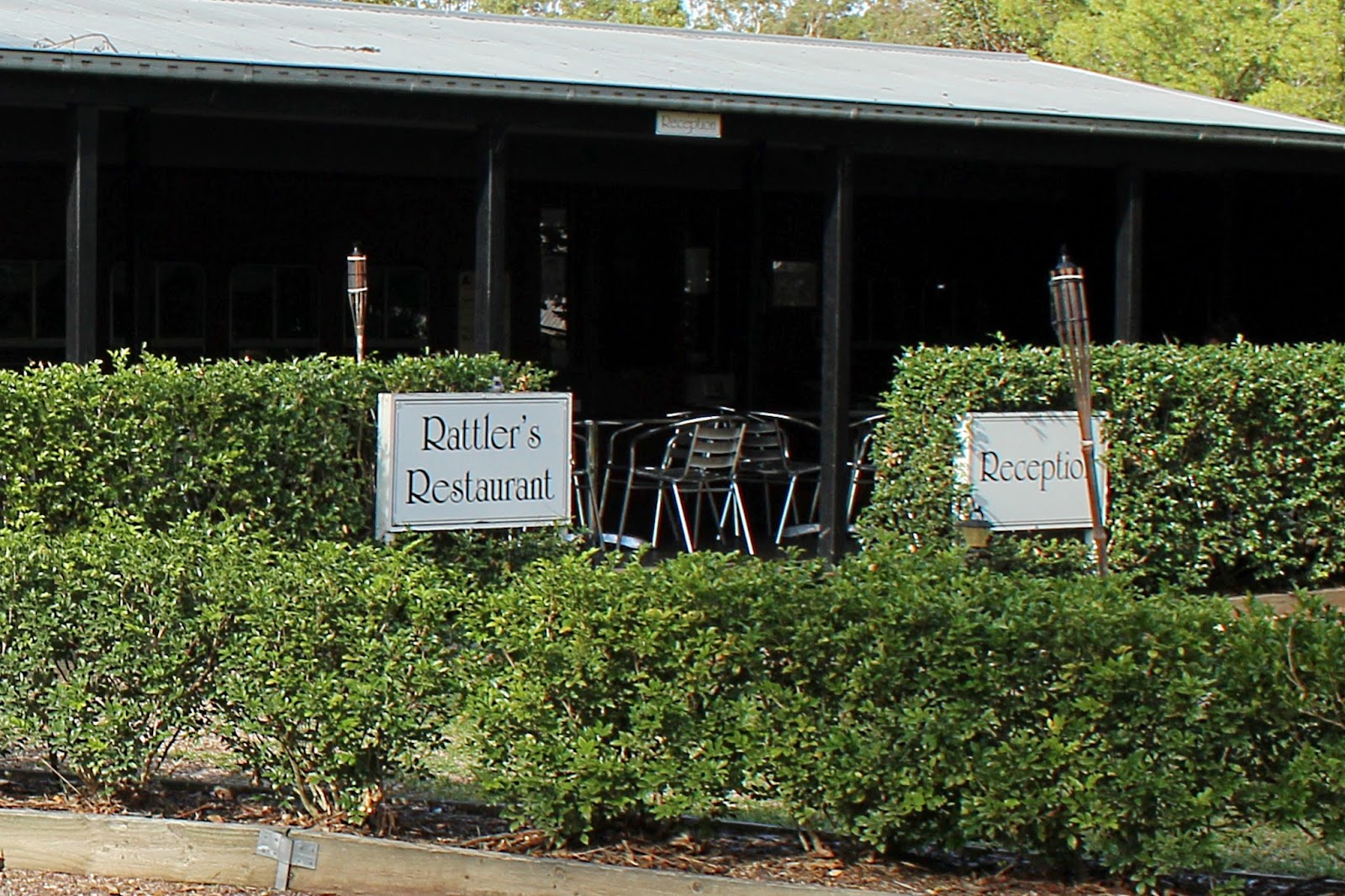 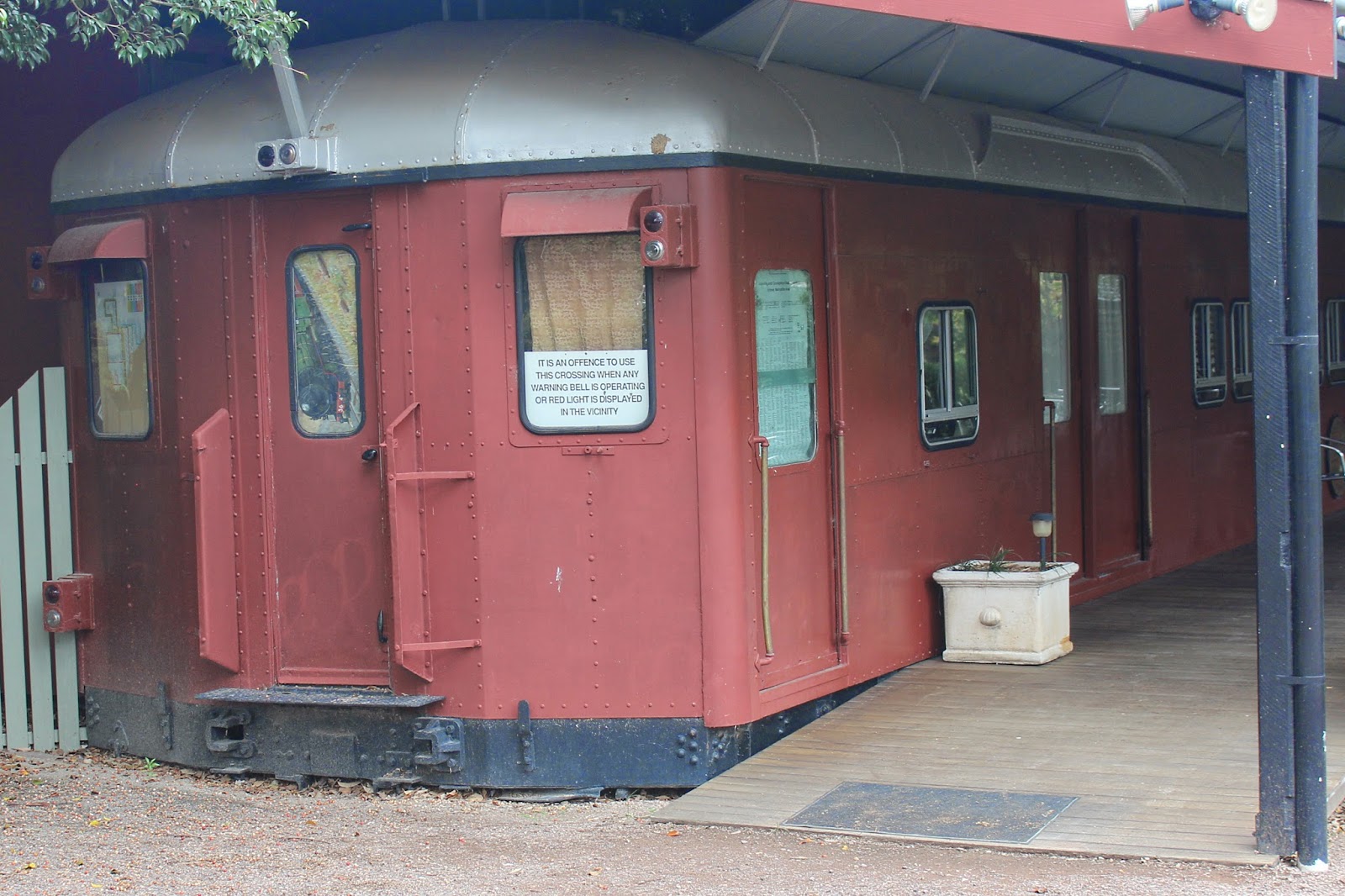 I walked back to the car, where Mat was standing, taking photos of a train that was passing through.. I'm glad I didn't go ahead with my 1st idea of blindfolding him because I'm pretty sure he would've ripped it off as soon as he'd heard that train hahaha...

Anyway, we jumped in the car and drove over to our carriage and I told Mat that the lady had left the key on the door so we could go in and take some photos of the inside. Mat thought that it was really cool that they'd allowed us to do that.. At this stage I was trying really hard not to laugh at him, as he still had no clue what was going on! So, we stepped inside and he started looking around and that's when I said to him "only joking, it's ours for the night". I think he was in shock!! 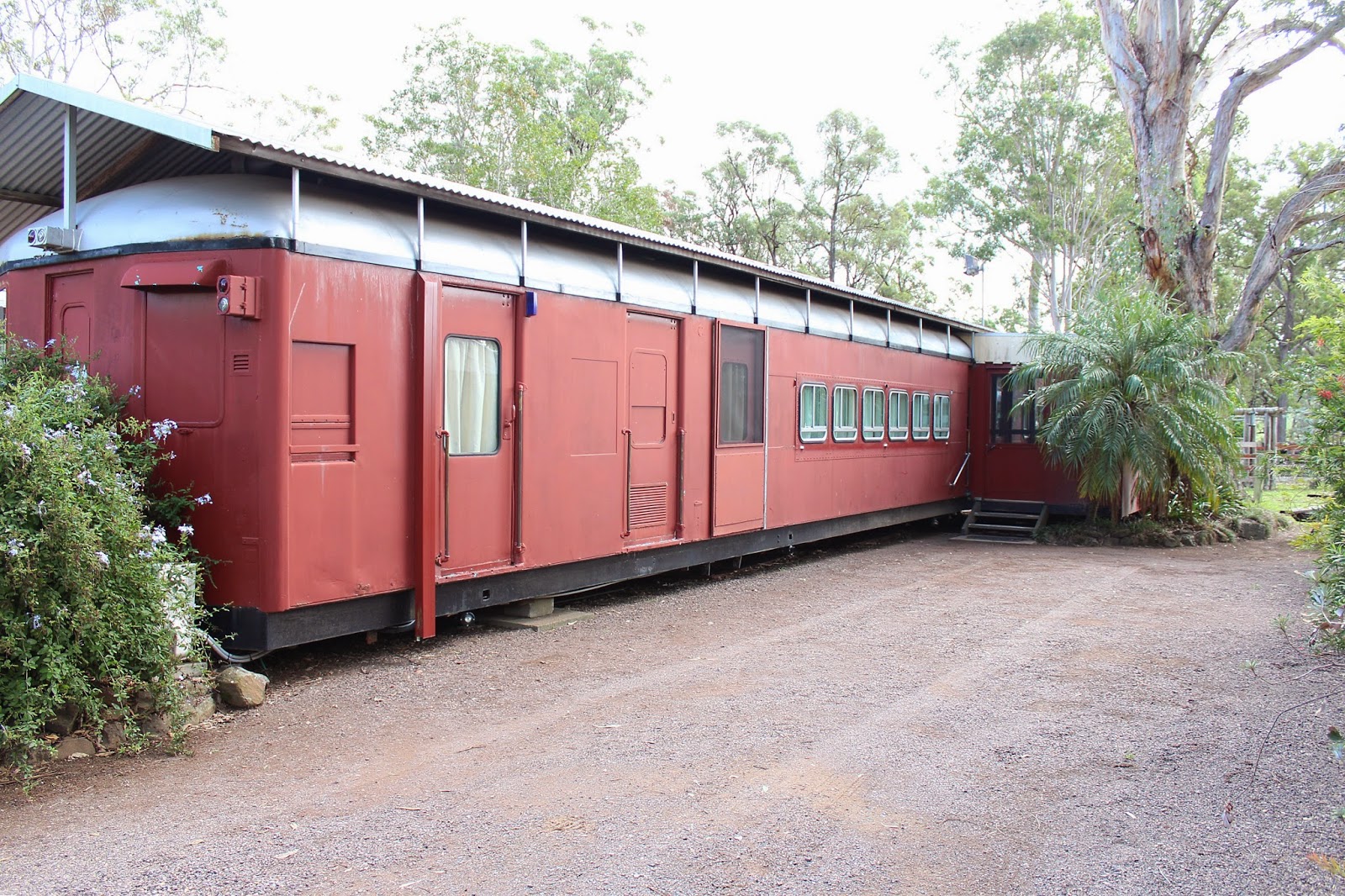 The inside was much bigger and roomier than I had expected it to be.. Very neat and tidy with 2 rooms- 1 with a queen bed and the other with 2 sets of bunks, a kitchen, dining area, lounge and a bathroom.. Attached to the side of the carriage was a private patio with a bench. Just outside was our own wooden table and chairs and wood BBQ. 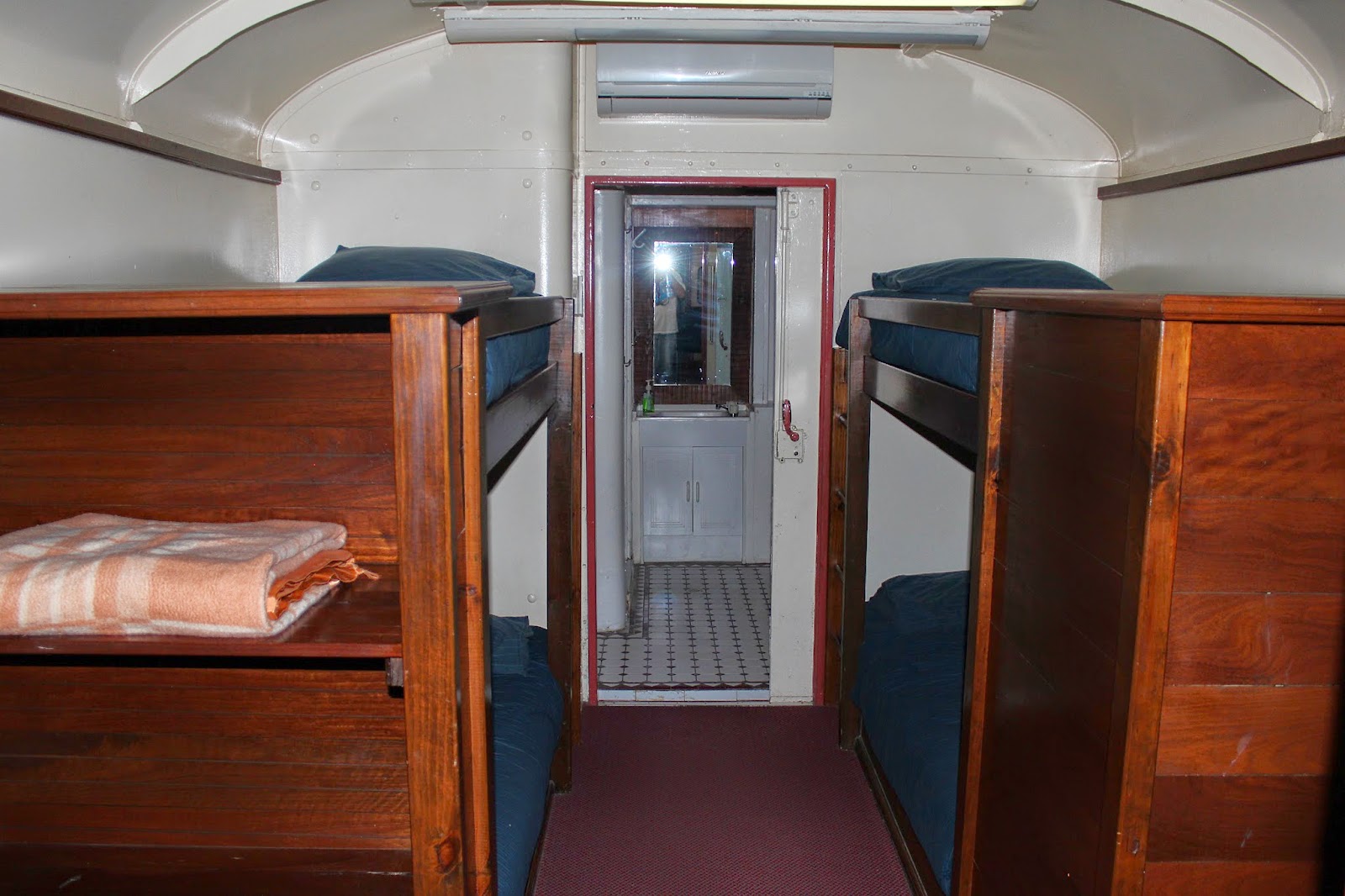 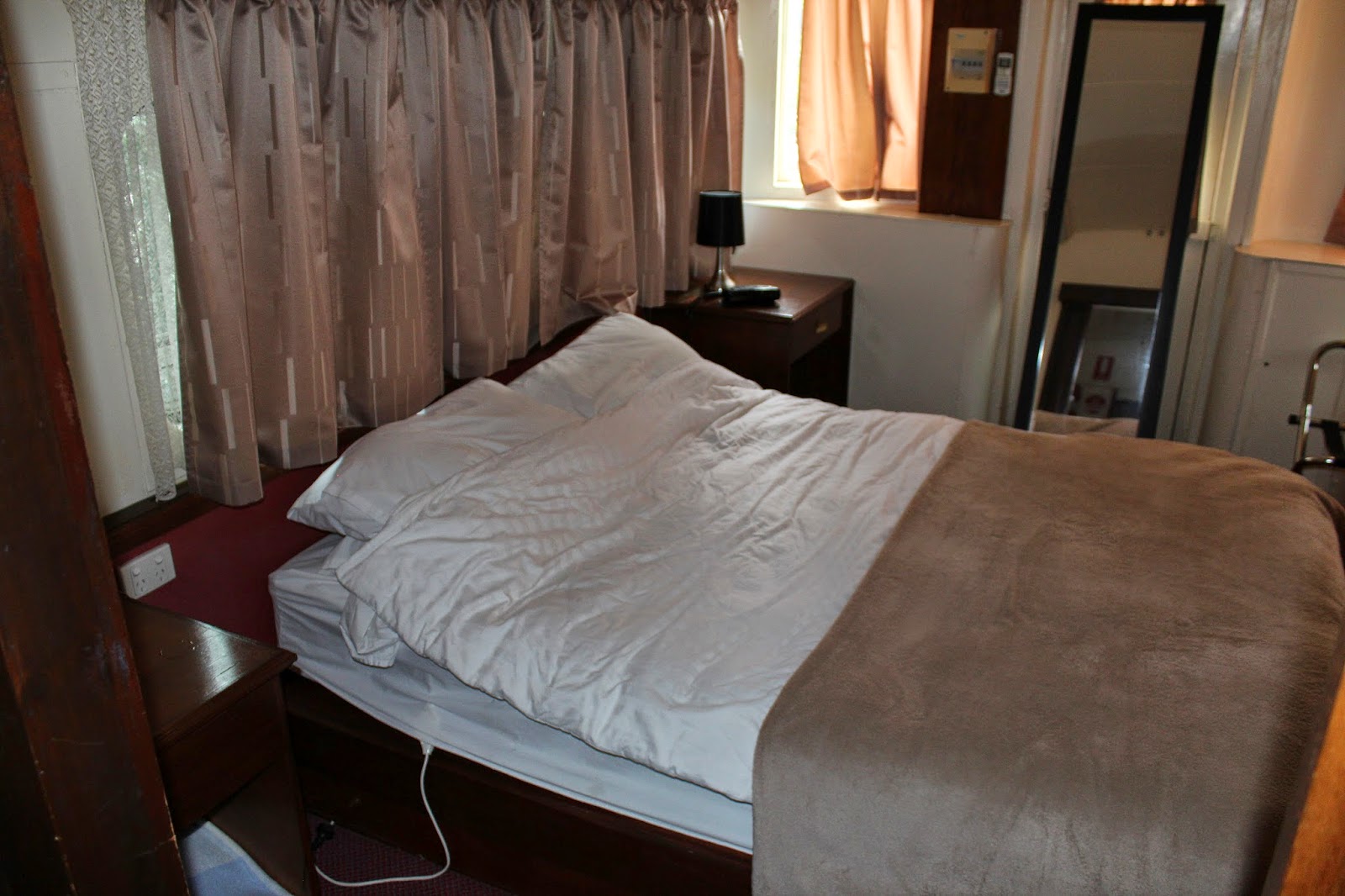 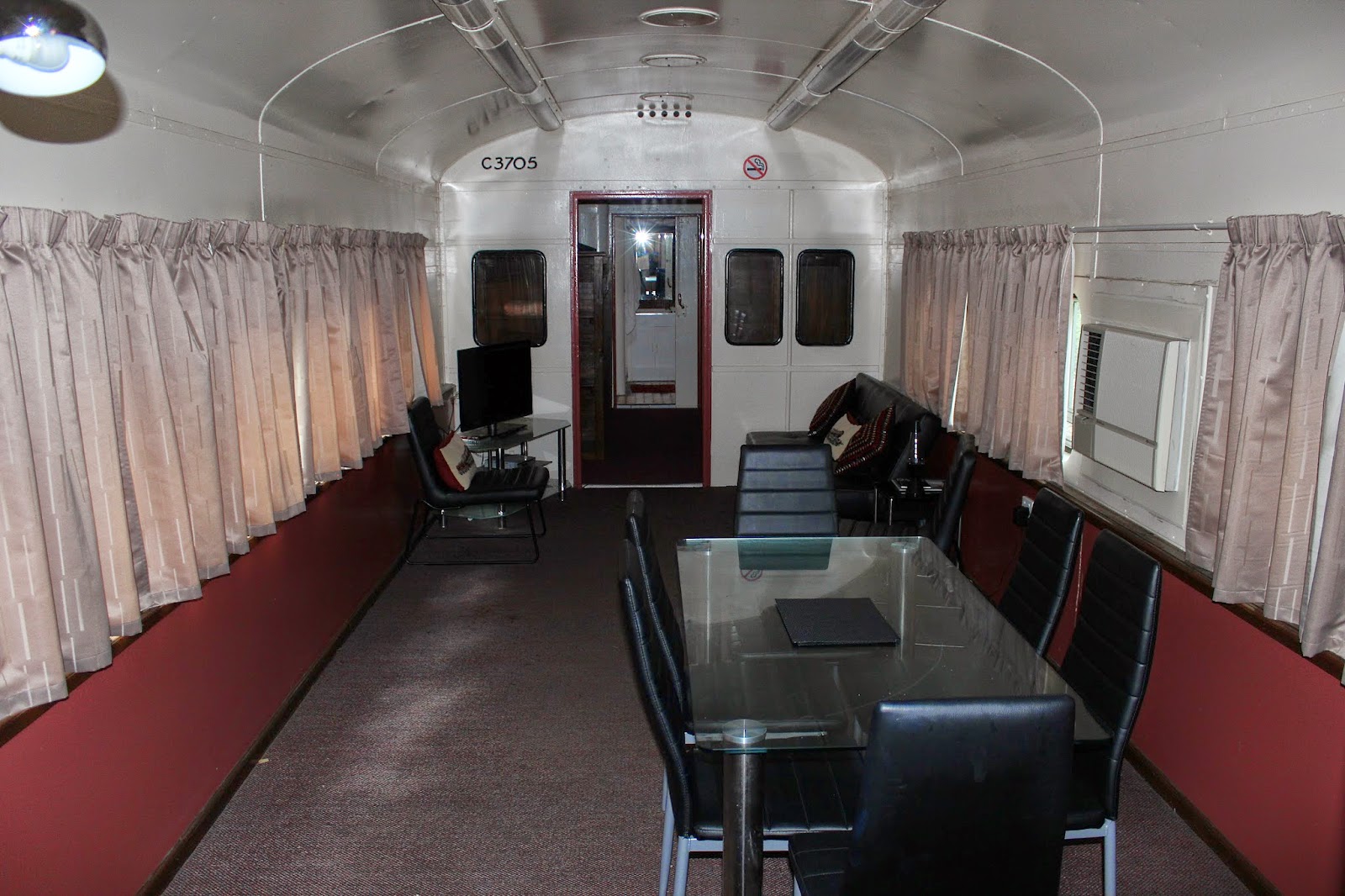 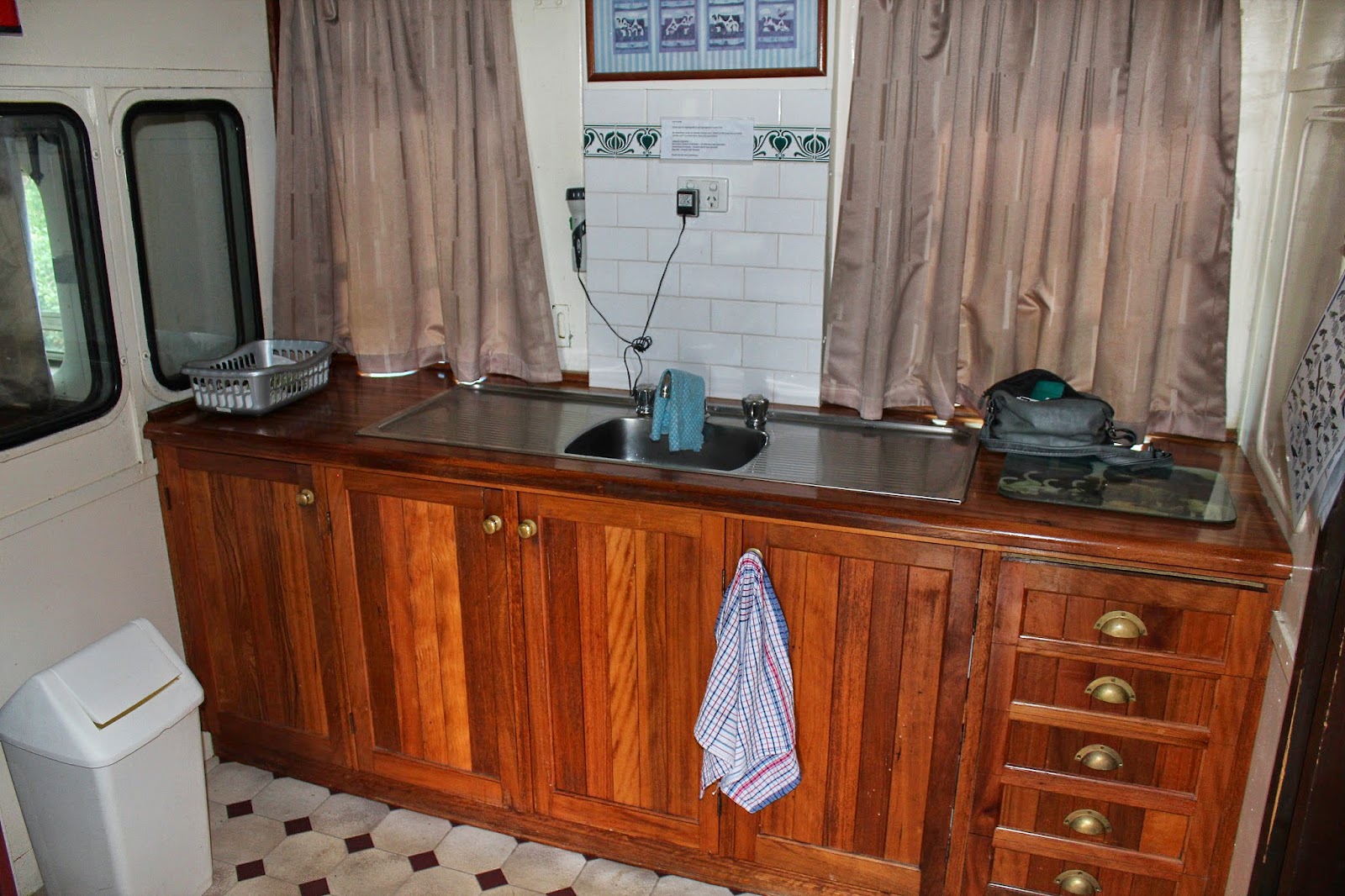 The actual property itself is located in a beautiful, secluded location, set amongst meadows with big green hills in view. It was peaceful and quiet (besides the trains coming through). We sat outside admiring the view for a while, where I mentioned to Mat that we were booked in for dinner later on.. By then he was speechless and still couldn't believe that I had organized all of that, without him knowing! I wish I had a camera to take photos of the vague look on his face! We unpacked the car and then relaxed outside for a bit with a couple of drinks before dinner, watching the odd train go past... 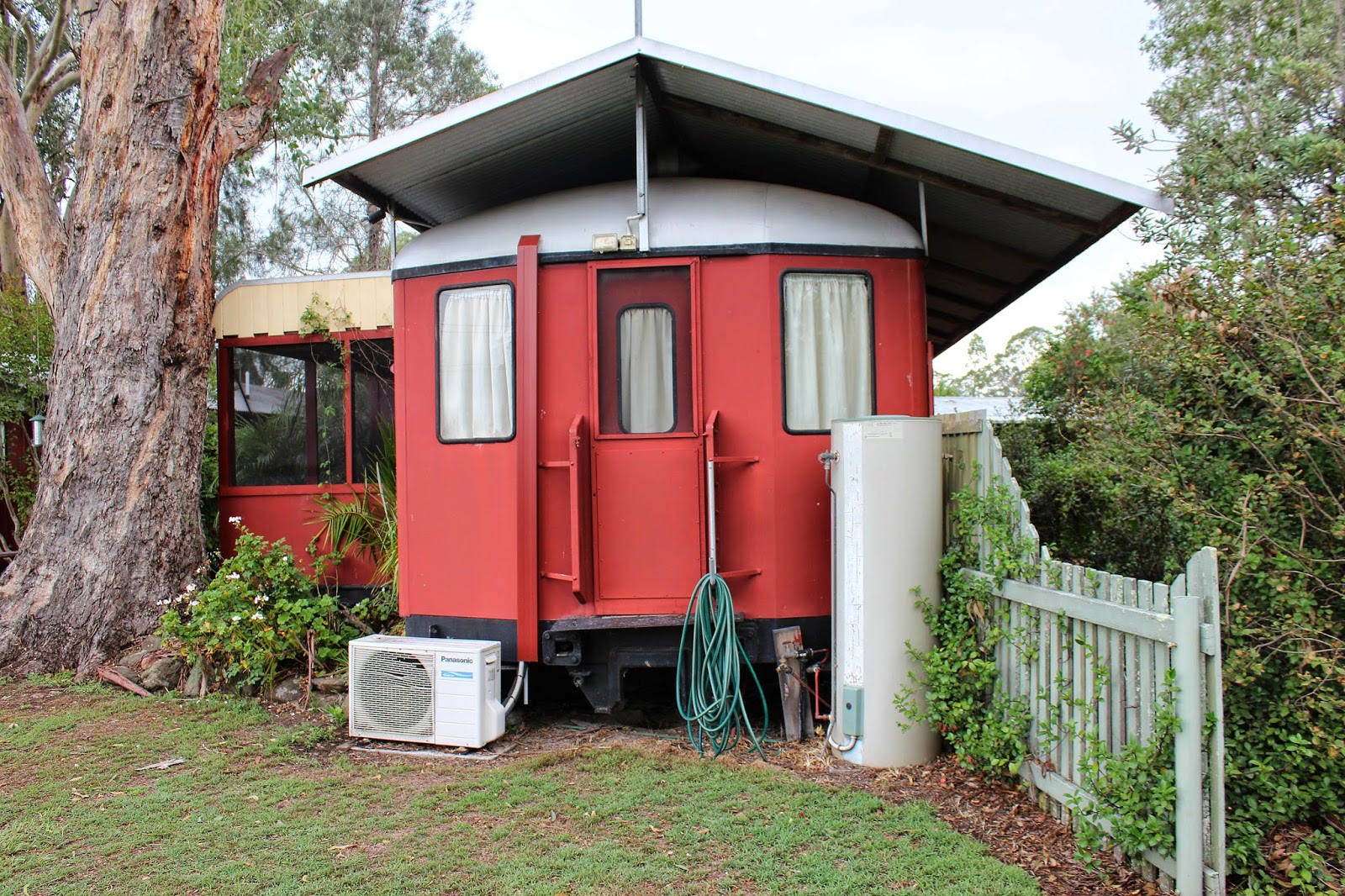 We then got ready and walked across to the restaurant, which was lovely inside.. It was set up as fine dining with scarlet coloured drapes hanging over the windows and had an intimate feel about it.. We were seated and then presented with the menu (set 6 course) and a complimentary bottle of wine of our choice (red or white). Mat made me laugh when he asked what we were meant to do with all the different cutlery and that he'd follow my lead. Soon after being seated our 1st course came out which was delicious and each course after was well timed and just got better and better. The food was absolutely devine and mouth watering!!! No negatives about it... The service was fantastic, not only for us but for everyone else in the carriage- including a party of 20 or so people. The waiters all had a professional manner. We couldn't fault them or the food at all! Usually you'd expect to pay a substantial amount for a 6 course meal- I feel that at the level the food was at and the service we received, $55 per person is well and truly under priced! As we were leaving the Restaurant, we were handed our breakfast pack for the morning (also included in package deal). That also was great and contained cereals, spreads, milk, juice, a variety of fruits and breads. We made our way back to The Flyer and settled in for the night ;p 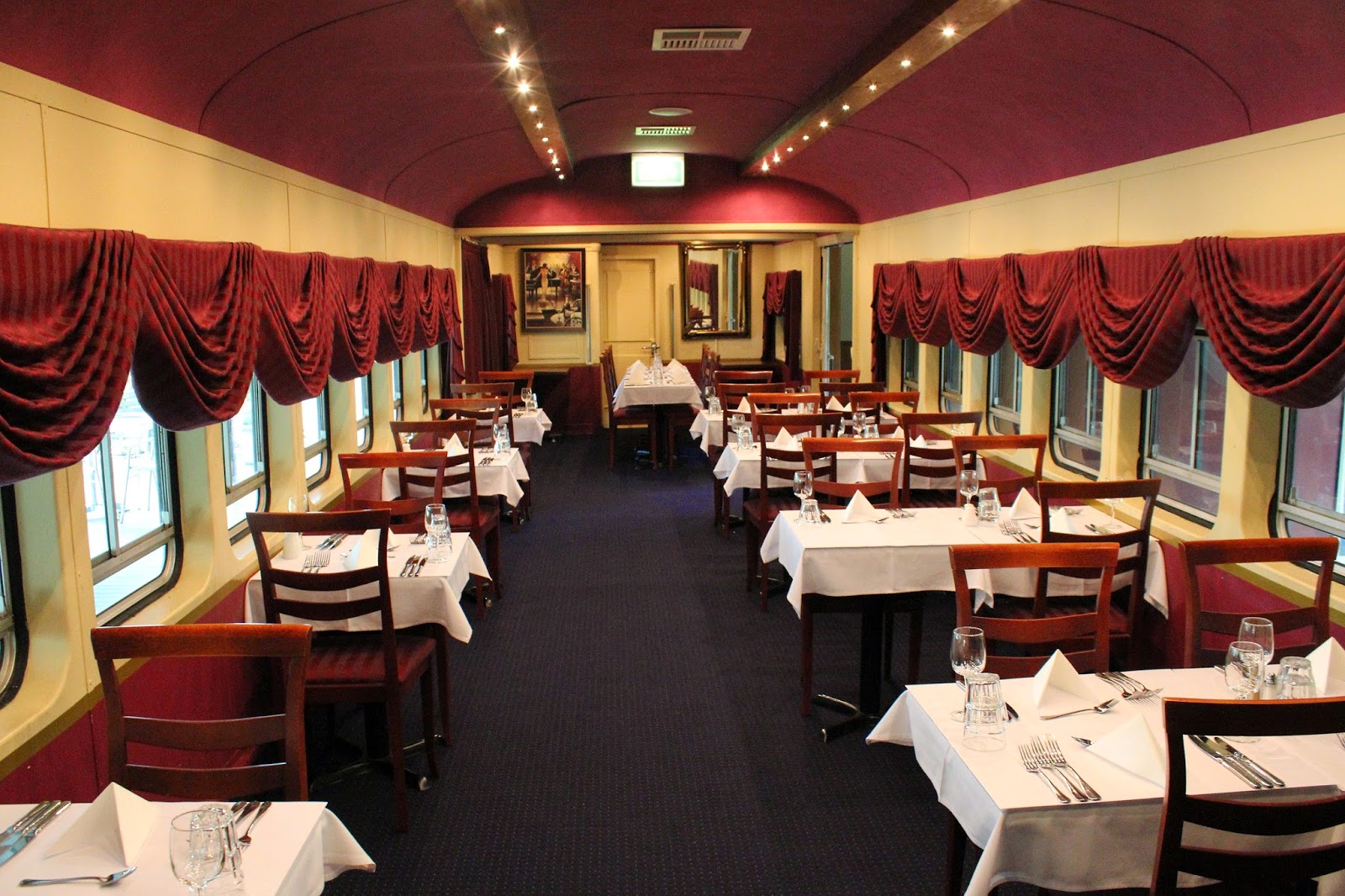 In the morning we were greeted by a herd of cows in the paddock next to us- that was extremely funny as there were sohhh many of them and they were loud!! We definately didn't need an alarm clock! We enjoyed our last cuppa outside in the clean, fresh air before packing up our belongings.. We headed down to the viewing platform (which is a bridge that goes over the line near the entry of the property), to wait for the scheduled train that was coming through to take some photos. It's a great view from there if you're wanting to see the trains..

Just before leaving, Mat took a walk around the property and took a few more pics of the train memorabilia that's around the place.. It was sad to leave as it is such a beautiful spot and 1 night just went too quick!! For any of you train enthusiasts or anyone looking for a relaxing, peaceful getaway with great service and definate value for money, I would highly recommend Carriageway the place to go- it is truly a little hidden gem! You wont be disappointed :) Mat and I both had a very memorable experience and we will definately be going back soon with the kids to visit the petting zoo that the place also has and get a taste of the Christmas in July menu, before the August menu comes out...

And so, we left Carriageway and stopped in at Martins Creek station (one of Mats favourites). It started raining but Mat made sure he still got pics of the platform etc... While we were there a train came roaring through unexpected! We then set off for Maitland and on the way we saw a couple of the locals, enjoying a beer along the side of the road hahaha...

We had a spur of the moment thought to pull in at Greta, hoping that on the off chance the 59 would be sitting in the yard, so around the corner we went and THERE IT WAS!!! Mat was stoked!!!! He couldn't believe it was sitting right there infront of us! One last surprise to top off our already amazing little getaway :)

Well, that was fun! Hope you found it some what interesting... Time to hand over back to the Boss!!

Till next time
Rachel Schindler
Posted by mat at 11:00 PM 4 comments:

Hi All
Placed outside the Illawarra light railway museum is this
little 0-4-0 saddle tank named Wallaby built by  Hawthorn
and Leslie in 1913. 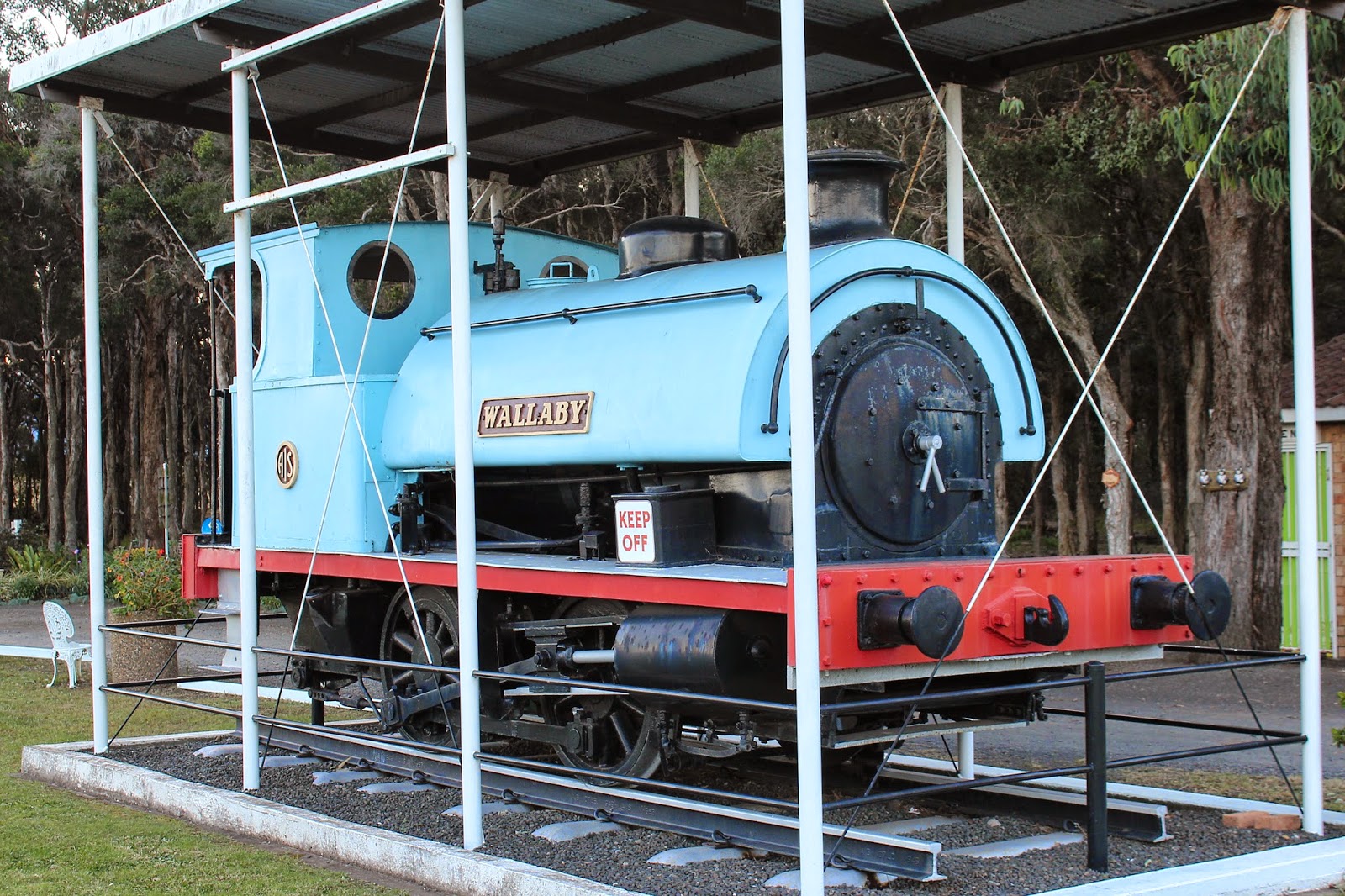 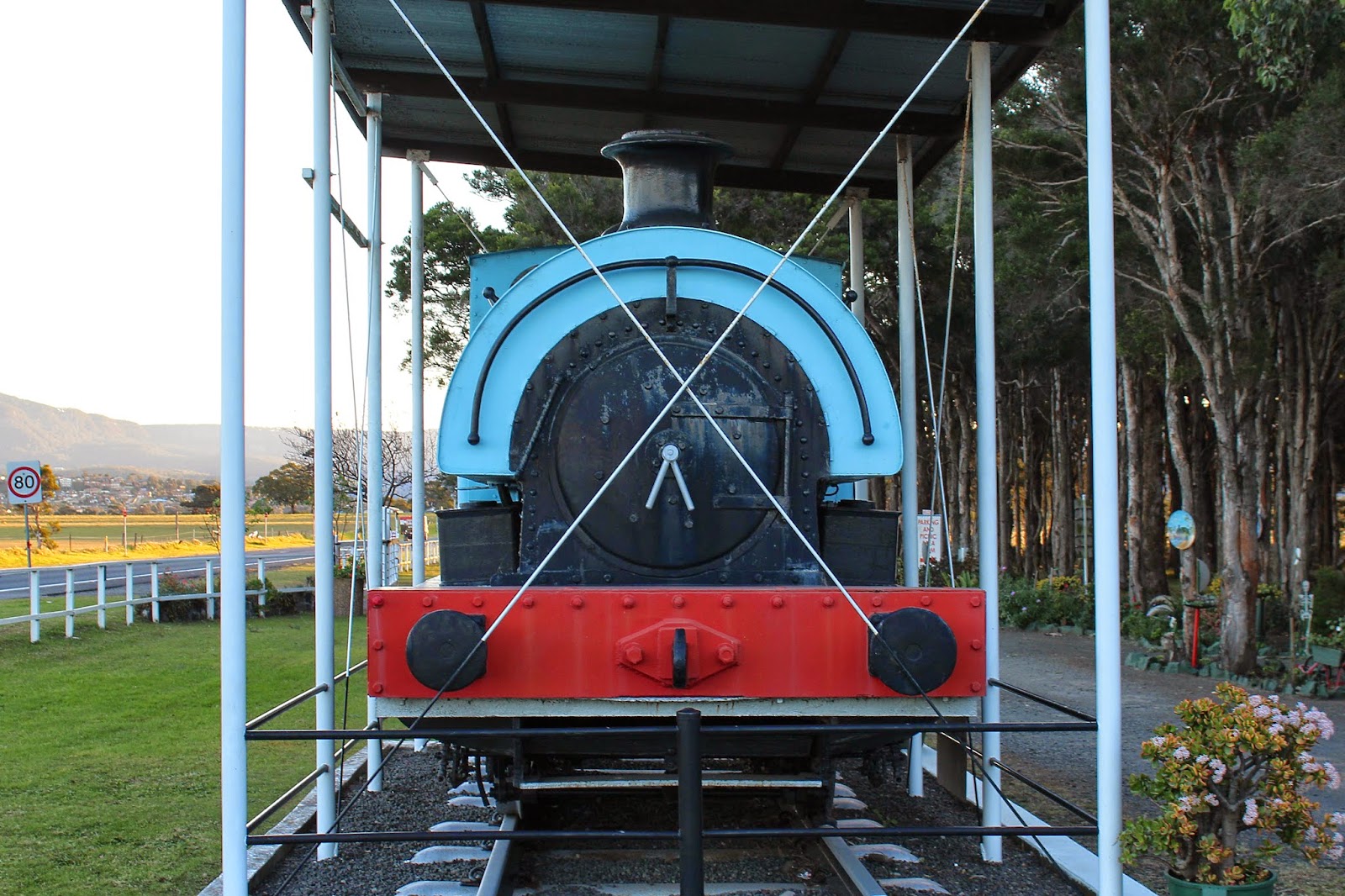 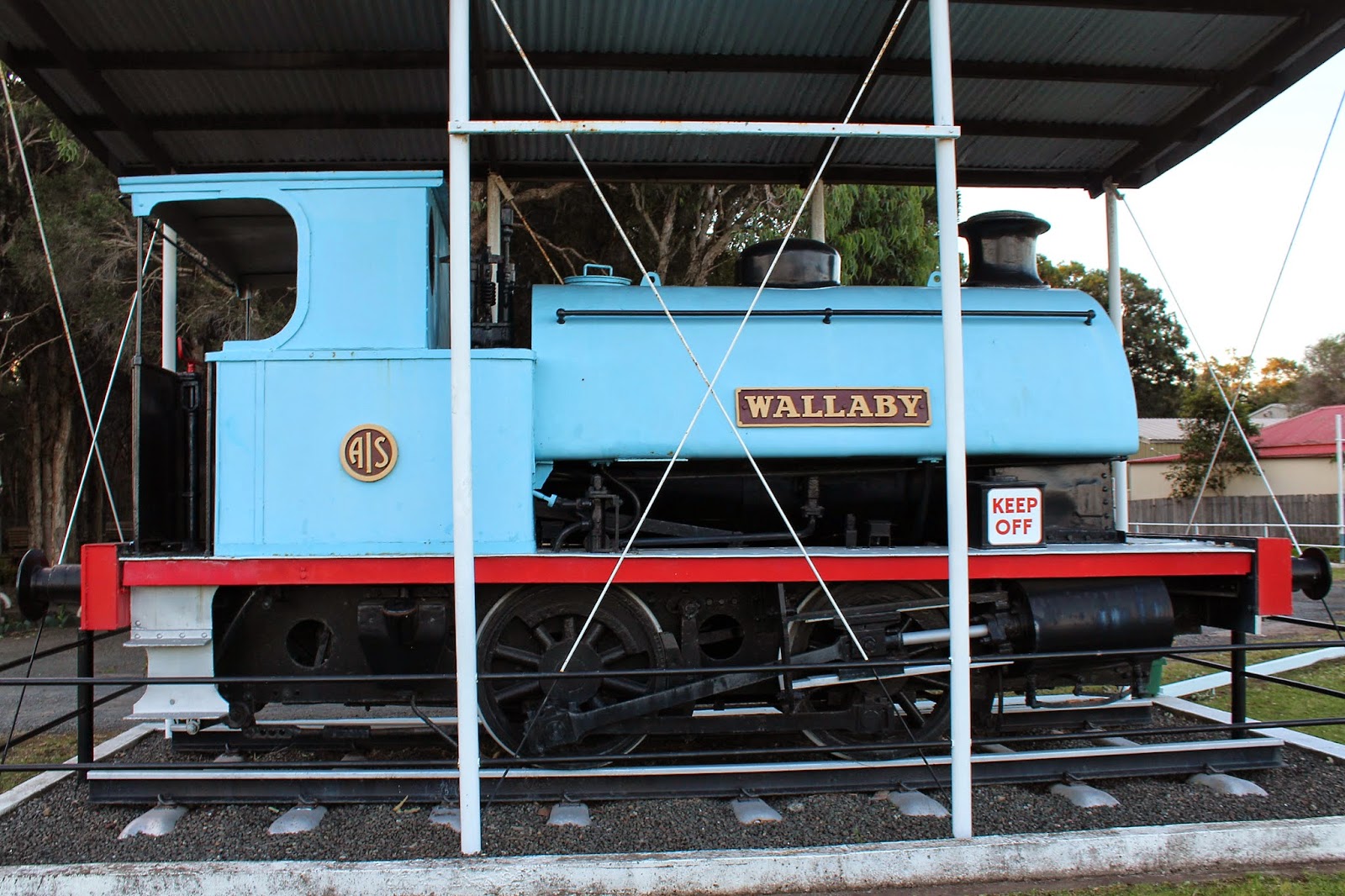 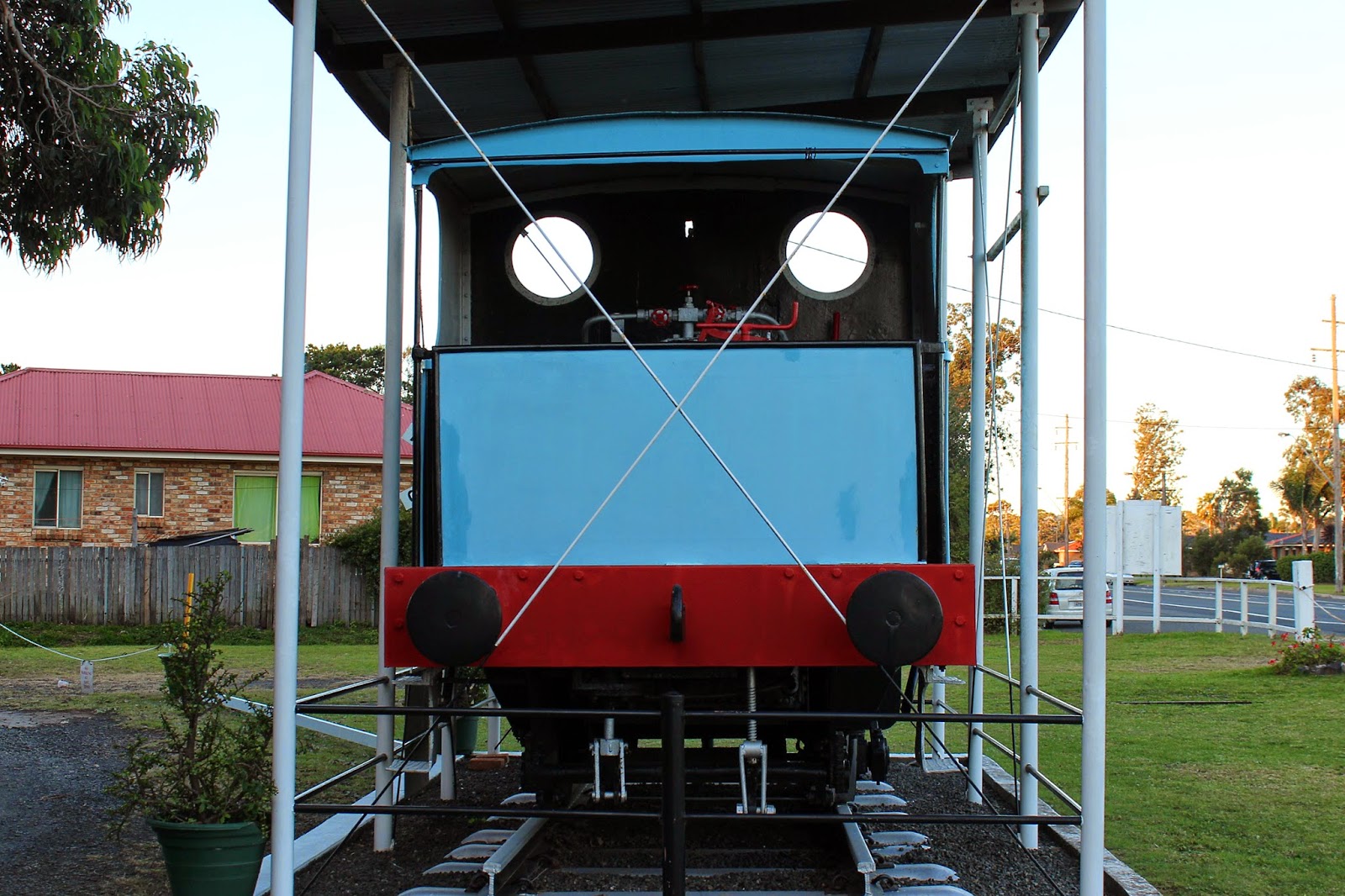 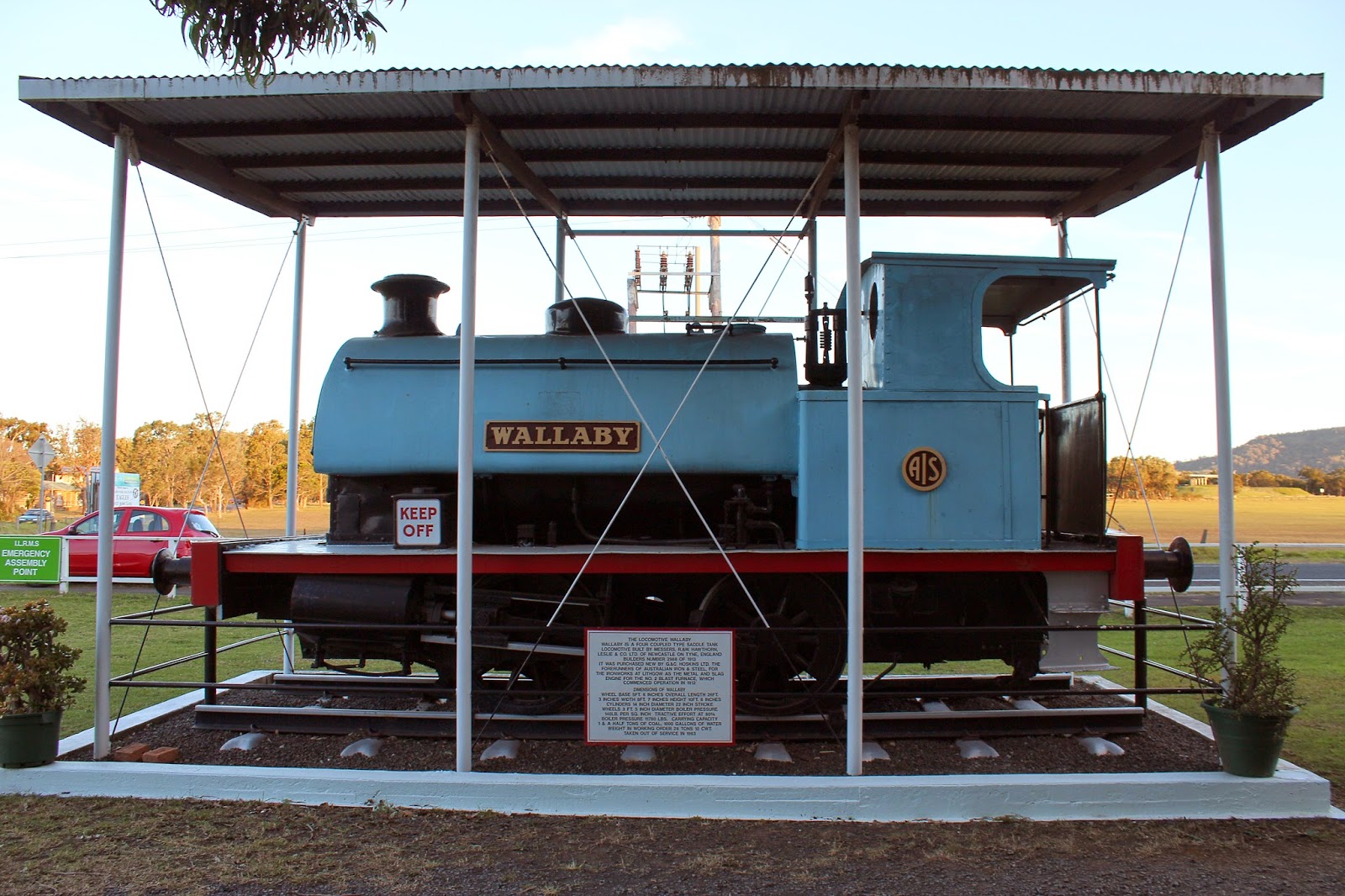 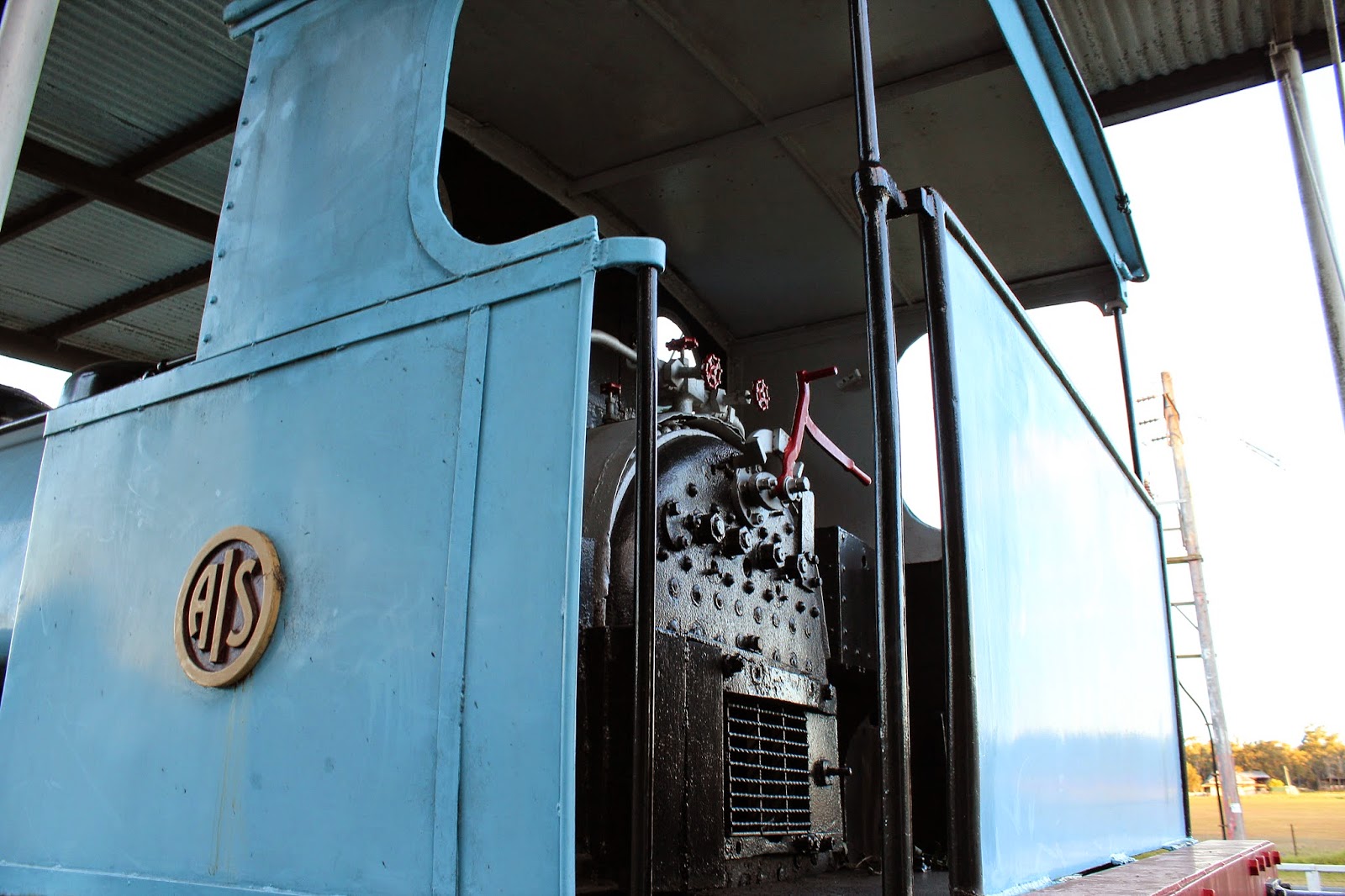 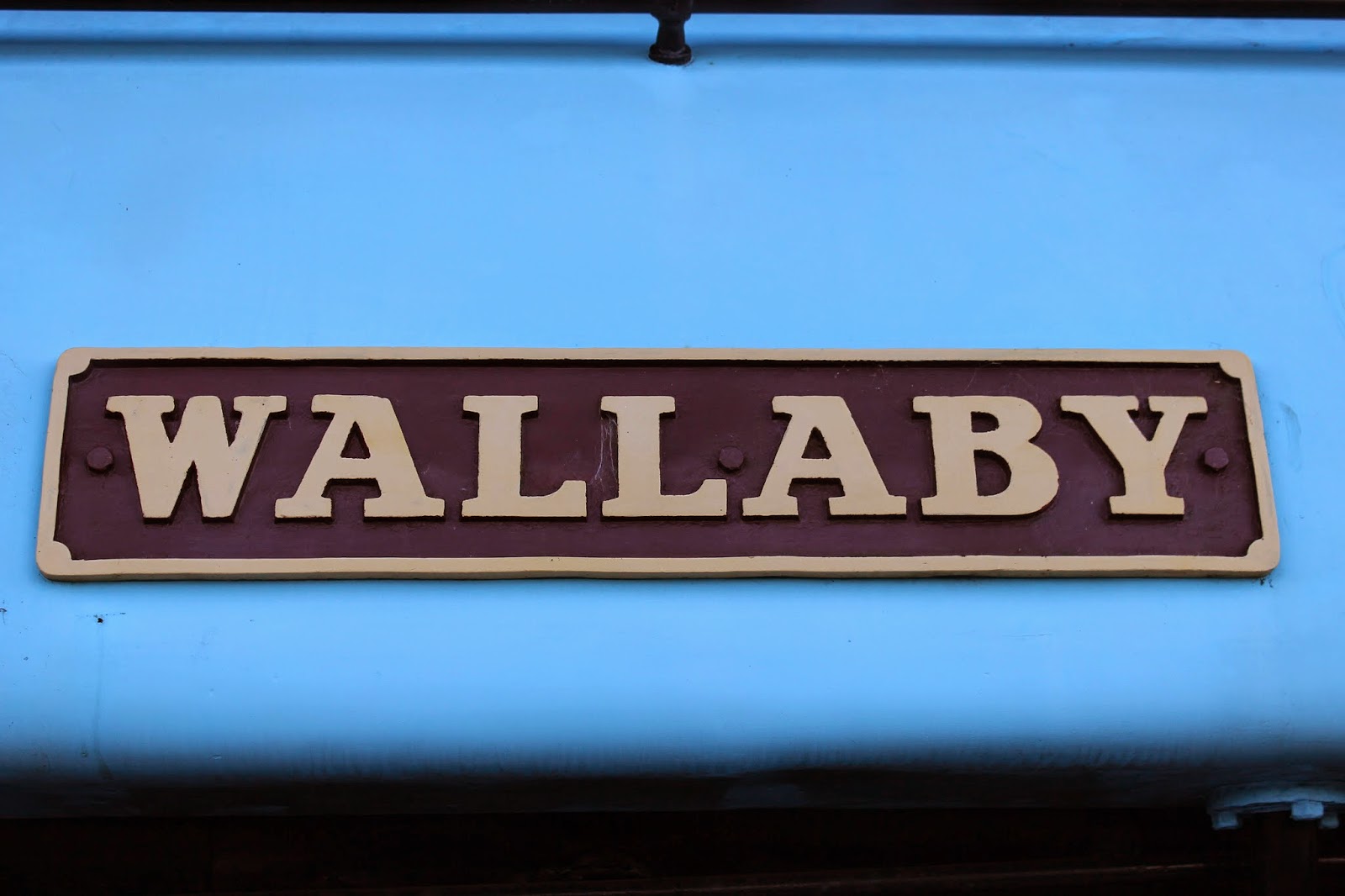 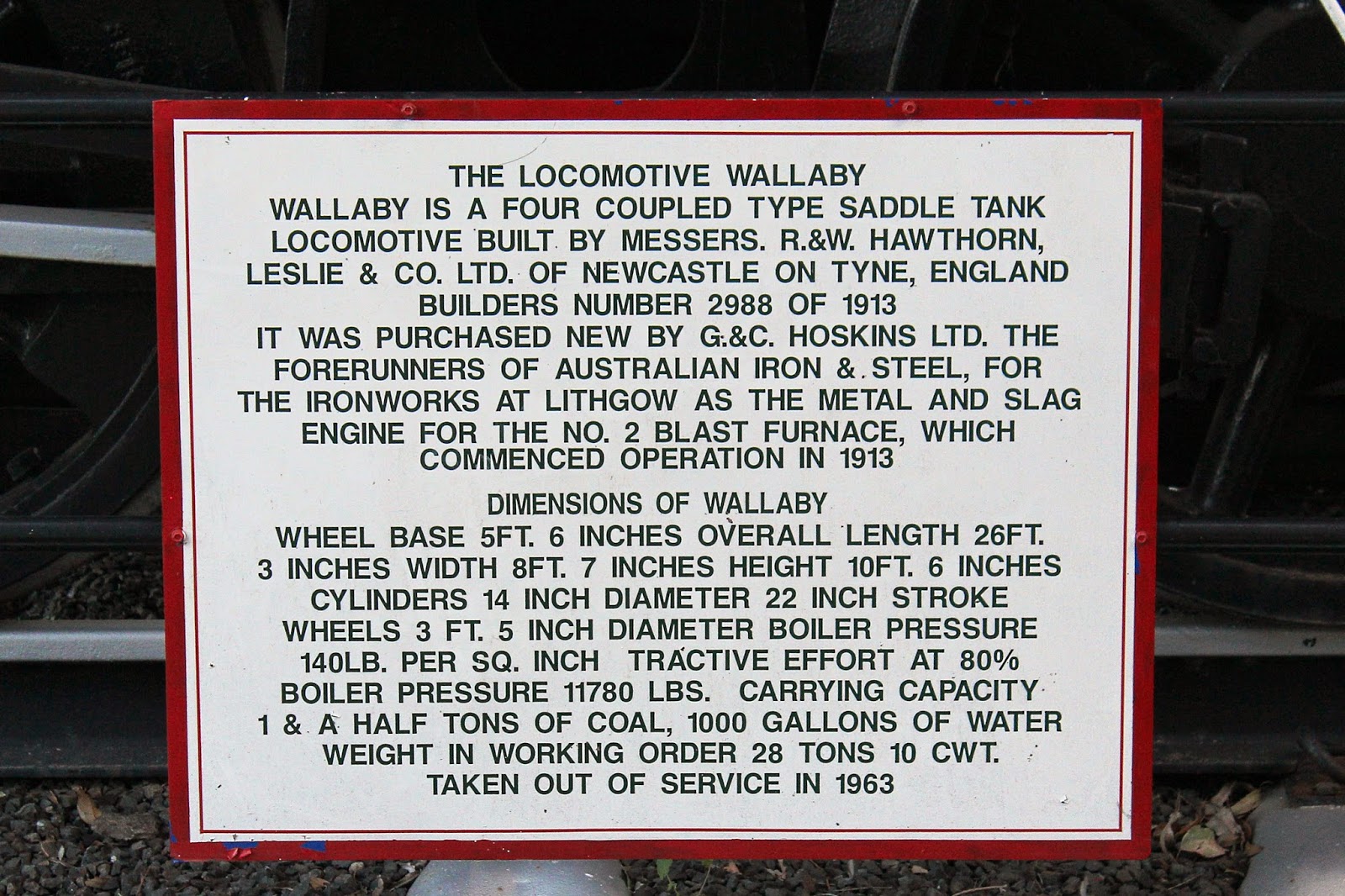 Till next time
Mathew Hughes
Posted by mat at 12:00 AM No comments: