This year for Mats birthday I thought I'd surprise him with a special trip to Victoria to see The Puffing Billy in The Great Train Race... I researched quite a lot before I decided to go ahead with my plan and the more I read about the history of the train and the race, the more I liked. It took me about 12 months of planning, organising and keeping it a big secret but everything went to plan and I couldn't have asked for things to go any better! While my idea was in the process, I had heard him talking about Puffing Billy to a friend of ours, saying that it was a dream of his to see it some day ( I didn't actually know) , so that piece of information confirmed to me that he would love the big surprise. He had no idea what I had arranged and got a HUGE shock on his birthday when I handed him the folder containing our plane tickets, itinerary and all the other information about the trip.

This was Mats first visit to Melbourne and I hadn't been since I was a kid, so it was exciting for both of us.
I booked us a very early morning flight to Melbourne, so we'd have enough time to have a look around the train route and pick out the best spot for the race the next day. Once we landed we picked up the hire car and set off for the Dandenong Ranges. We did a little bit of research before we'd left and made a couple of stops along the way to take a few pics of plinthed locos in the parks.

Our next stop was Belgrave Station where the train rides start, including The Great Train Race. I had booked us in for a three course set lunch upon The Puffing Billy called the Steam and Cuisine Luncheon Train. The Dining Carriage looked lovely and was all set up and ready for us when we boarded. When you pre book you're meal online you have a selection of either a Grazing Platter or a choice of 2 different mains and desserts. I had chosen what Mat and I would be eating- so he had to eat what he was given!  Lunch on there was a very different and unique experience.. Very bumpy at times but it was fantastic to be aboard Puffing Billy and taking in the beautiful views along the way. The meals were delicious!! 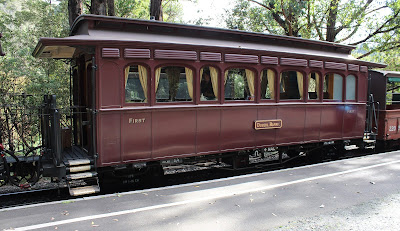 Along the way we stopped at a few little stations, picking up other passengers and went along until we reached Emerald Lake, which was the last station for our ride and finish line for the Great Race. We were given time to hop off and look around at this quiet little place. Lake Treganowan itself is lovely and peaceful and if you have enough time you can hire a paddle boat to explore it. 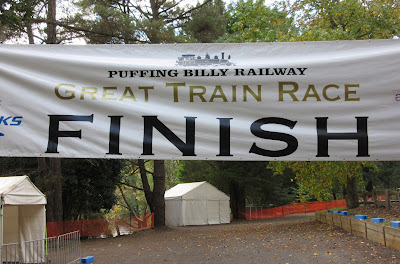 When we boarded back onto the train, our tables were set with our desserts which were absolutely scrumptious! We had the option of tea and coffee as well. 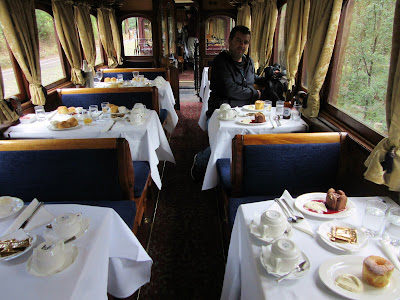 After dessert we were told that we were able to stand in between the carriages to take photos of the scenery while the train was in motion. This was really cool as we could see both ends of the train and so we were waving at other passengers when we went around bends. Getting sprayed with soot made it more fun!! We really enjoyed the train ride, the service was great and the meals were well worth the money. We will definitely go back, even if it was just for a ride without the lunch. Puffing Billy runs quite regularly throughout the year and has a number of different rides to choose from. The scenery is just so beautiful, going through the ranges and seeing all the locals and tourists with their cameras, standing by the roadside and crossings waiting for the train to come past along the way made the trip more exciting. 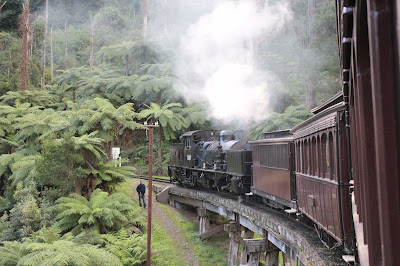 Once we arrived back at Belgrave Station we bought a few souvenirs from the Puffing Billy shop then drove 20mins down the road to Mats next surprise; a hidden little stone cottage I'd booked through Steindorf Cottages, our accommodation for 2 nights. Mat and I both love the older style stone buildings, so when I came across this place, I knew it'd be perfect for us! Even though the location was only 20mins from the town, it still had a very private, secluded feel to it. The cottage was very cosy and well equipped for our stay. It did get a bit cold during the night but the fireplace in the bedroom and  gas heater in the kitchen came in handy. 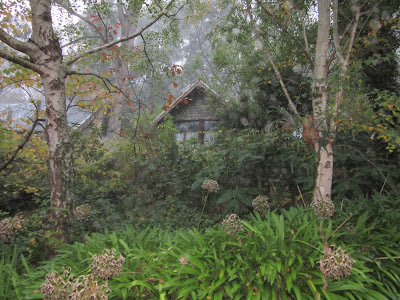 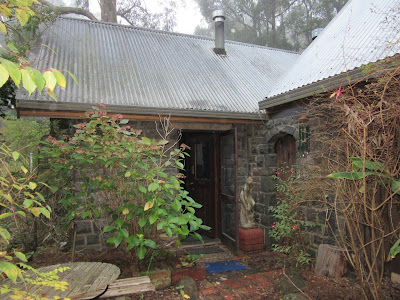 We had been running on 3 hours sleep that day, so we unpacked and settled in for the night to get a good nights rest to wake up early and recharged for the next big day ahead.

More to come in part 2
Til then
Rachel

The changing face of Hexham

Hi all,
I recently went to Hexham, after not being there for a while to take some shots of the new Aurizon Maintenance Centre. I thought I'd put my pics together of the different stages of development that I have taken over the years, to make an interesting blog.

I have tried to take pics of the different sections on the same angles, showing the vast changes.


The next 3 shots show the major changes to the right of screen...

And another angle showing the before and after of the other end of the Maintenance Centre
Till next time
Mathew Hughes
Posted by mat at 9:53 PM No comments: